In case you haven’t heard, I’ve been doing a lot of cleaning.  Most of that means taking things that are no longer working and getting rid of them.  But I have a bad disease of saying, “I can make something with this!” and hanging on to things for ages.

For example: I thought I was going to do some awesome project with empty beer and wine bottles.  So I started to save them.  Now it’s a habit and I’m like, “Woo, I have a six pack….of empty bottles…”  Maybe I can sell them on Etsy to people with more follow-through.

Anyway, when I saw these lamps, I saw DIY project written all over them.  For $10, I have all new lamps.  How did I do it?  Simple: spray paint.  Next to Mod Podge, it’s my favorite craft supply.

Let me tell you how I took these lamps from beat up and dated to shiny and new.

Step 1: Decide you can make something out of this.

Spray paint is my friend.  I love spray paint.  I took a can of spray paint to old, beat down chairs and they now look decent enough to be used in my dining room.  But that’s beside the point. 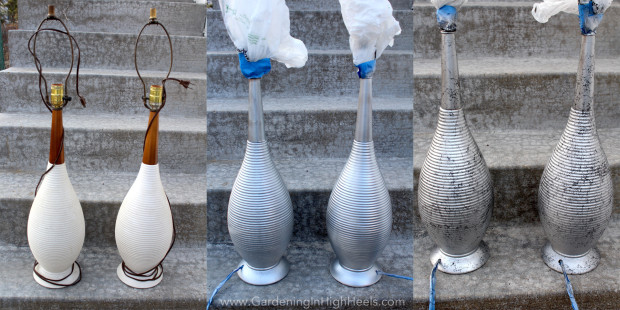 These lamps were in my Grammy’s apartment (I believe) and somehow ended up in my father’s basement.  They were used for a while and eventually replaced.  They still worked, so we didn’t get rid of them.

And they still work years later!  I’d love to redo the wiring, but that’s another DIY for another day.

Step 2: Decide what you want them to look like.

I was going for a mercury glass effect thanks to the brilliant mind of Jonathan.  I went to my second favorite craft place (JoAnn Fabrics) and found silver spray paint and spray paint that makes a webbing effect.

Dude, it comes out just like Spiderman.  I felt so cool.

Spray paint is the best thing when DIY-ing. I love Rustoleum because it covers everything and lasts for ages (or until you spray paint again)! 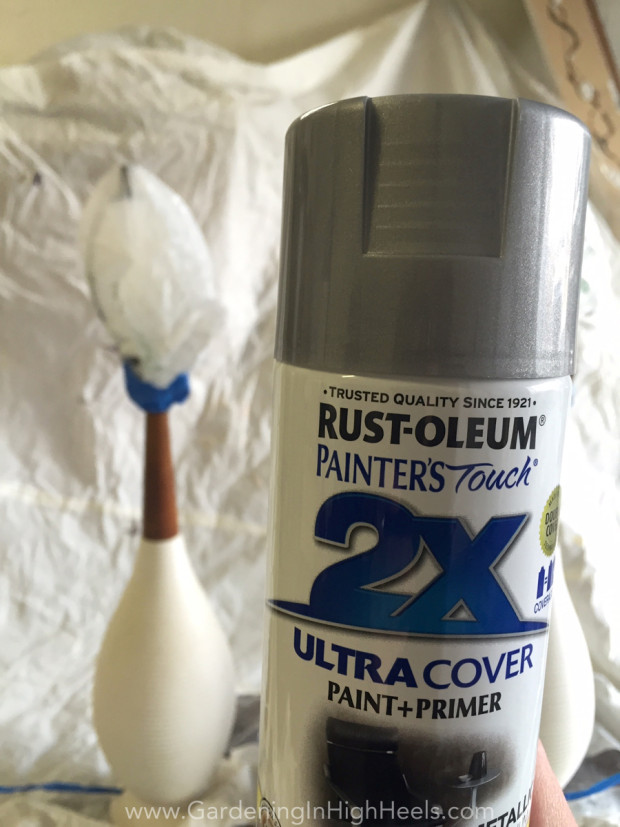 Be sure to tape off all parts that shouldn’t get painted (wires, the top bulb receiver thingy).  I don’t care how careful you think you’ll be, you will get paint all over.  I’m a pretty good DIY-er, but my best talent is making a mess.

I did two coats of silver and a coat of the black webbing.  I’m slightly disappointed the black didn’t show up better with the webbing paint, but the ridges make it difficult to see.

I almost stopped at painting them just plain silver.  It looks so sleek, but it also kind of looks like a soup can.  I have a hodge-podge of furniture right now, but collection-center chic isn’t what I’m going for.  So I added the webbing paint on top to try to give it some texture, dimension, and those little crackles in the mercury glass. 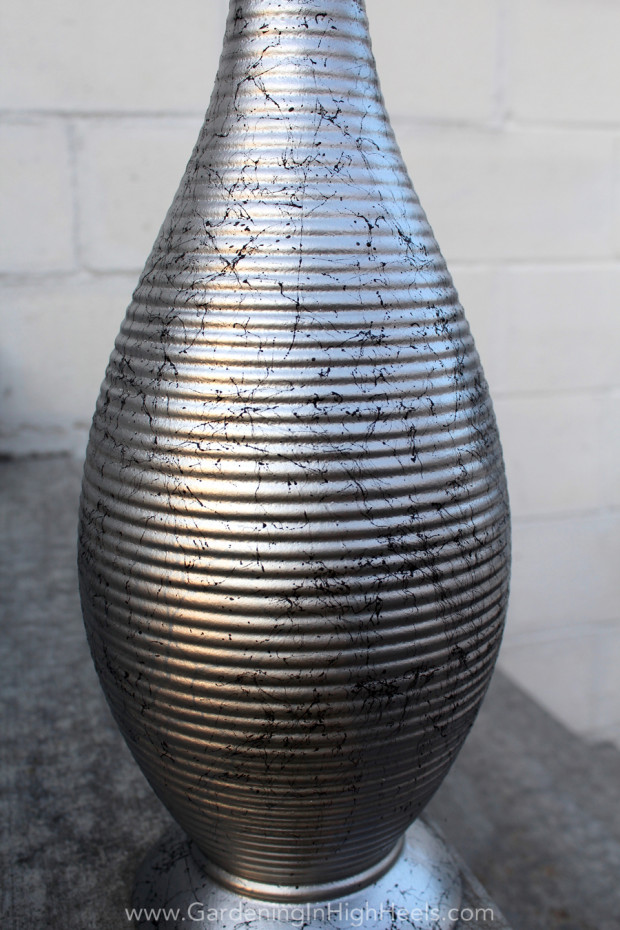 I checked Instagram and got a comment from a friend saying that she’d buy these from me if the wooden part was painted gold and the base stayed the same.  And I got painters’ remorse.  That would have looked awesome.  I was seriously upset I didn’t do that.

But then I remembered the white ceramic part is old and pretty beat up.  Instagram just made them look pretty and white.

Plus, I can always paint over them again if I want to.

Step 5: Find somewhere to put them and revel in your DIY powers.

These guys hung out in my garage for a week because I wasn’t sure if I was going to add another layer of webbing, either black or gold.  I still could.  But once you decide, Okay, that’s enough paint, now you need to figure out where to put them. 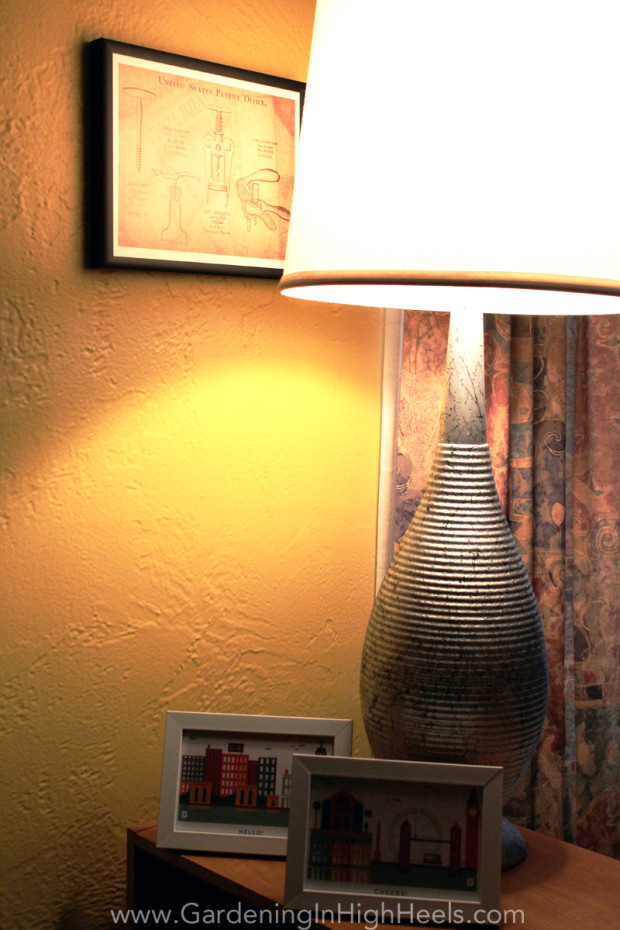 The lamp shades that were also found in the basement are a little tooooo tall, but hey, they’re free.  And the lamp base itself is pretty big, so I guess it balances out.

These are going to hang out in my bedroom and my living room until I have my office in order because I originally had the intention of using them as lighting in my office. 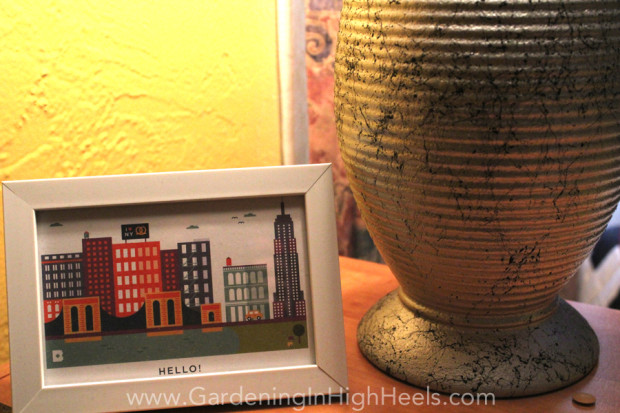 There you have it.  Five steps to a DIY lamp (or anything) makeover.  I cannot tell you how much I love taking something old that someone would say isn’t worth keeping and turning it into something shiny and new and pretty again.

Have you done any projects recently?  What did you DIY?