There’s something so fantastic about a good show.  You get sucked in.  The characters are dynamic.  The story lines are captivating.  The scenery is vibrant.  You want to live in the show.

I’m going to preface this by saying I don’t watch a lot of TV.  My set is from college and I have purses bigger than the screen.  So when I live for a TV show, you know it has something magic about it.

A lot of these shows are from years past when I did have more time and the luxury of a bigger screen.  They’re still favorites and shows I’d love to live in.  Do we have any favorites in common? 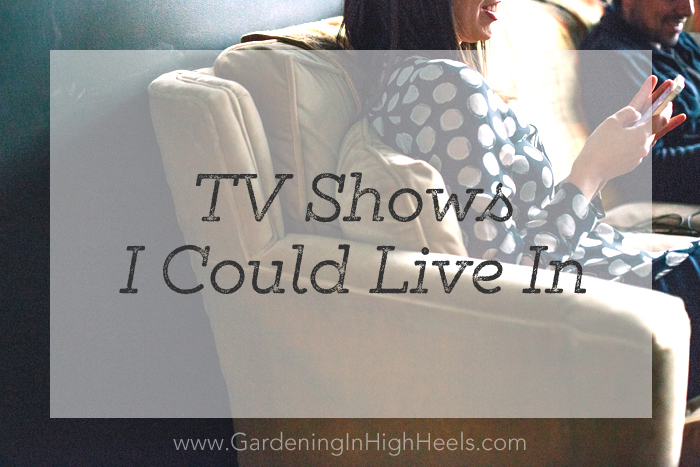 Sex and the City

When I was younger, I would watch SATC on HBO until my mom came home from work.  I thought I was being so slick and she had no idea that I was developing a deep attachment with this show.

Well, she knew.  She’s a mom – she always knows.  And she started to watch it with me.

This is my number one if I could live in a TV show, it would be this one pick.  Everything about it from the friends and clothes to the themes and the Of course, I’m a Carrie.  Hello, I love writing and shoes.

I slightly based my decision to attend Penn State based on Rory and her beautiful, old, ivy-covered campus.  I was no Rory in terms of books smarts, but I could have my own, less trust-fund version!

I love that while Gilmore Girls is mostly happy, fun, and upbeat, there’s a real dynamic with the characters.  It isn’t all sunshine and roses, even though Lorelei and Rory are basically inseparable (expect for that one season that was just a waste of our time.)  There is a real view of relationships here.

And Stars Hollow is just so dang cute.  Many thanks to Meghan for sharing that link!

Back when I was working at Sharp Edge, I had the idea of hosting a Waffle-Off (like a bake-off but with waffles).  I even pitched it as a possible Yelp Pittsburgh event idea.  No further proof needed that I am Leslie Knope in spirit.

What I love about this show is that it all seems plausible.  I know, it’s a caricature of a small-town governmental agency, but it seems really real.  The relationships, the characters, the whole thing is very identifiable.

Plus, Ron Swanson has the best lines ever.

On giving your all: “Give 100%.  110% is impossible.  Only idiots recommend that.”  On crying: “Crying: acceptable at funerals and the Grand Canyon.”  On small dogs: “Anything under 50 pounds is basically a cat and cats are useless.”

Imagine what he’d say when cameras aren’t around?

This for me is all about living in the Hamptons.  If I could live in this show, I would want to be Paige.  She has the best clothes/hair/makeup.  And she’s living her dream job as an artist.  I mean, what could you want more of?

Oh, so you think you want more?  How about beautiful shots of summery beaches and brilliant-blue Hamptons water?  Yeah.

I think I’d like to be a fly on the wall of this show and not so much in the show itself.  It isn’t anything against the hijinx that everyone gets into, it’s just fun to watch everyone interact.

I think more than anything, I’d want to know what’s happening in the background.  They got a little into this in the later seasons with more of a personal look at the characters, but I want more.  What Dwight is like when he gets drunk?  What do Pam and Jim do on Saturday morning?  That kind of thing.

It’s no wonder that Parks and Rec and The Office are both on my list.

What TV show are you just so obsessed with, you wish you could live in it?