Today is the first day of Emily Levenson’s Project:Food Budget.  I’ll get to that below, but first…

Ever since I was younger, I wanted to be a writer.  I know I’ve said that before, so it shouldn’t come as any surprise.  I haven’t written a book before, but I think I could probably write a book about nail polish, lipstick, and generally other makeup.  I’ve totally let the #LipStockChallenge slide, but I could write about it for days.

There are so many things I’ve learned about nail polish from working at a spa and generally being obsessed with my nails.  I feel much more confident, pulled together, and powerful when I have my nails painted.  There was a time that I could correctly name the polish someone selected for their manicure.

I’m sorry to say that since I’ve been working so much, I haven’t had time to paint my nails.  My poor collection misses me!  Gardening is also so rough on your hands.  It dries them out, makes your nails flake, and stripes the shine from your nails.

While my nails are more bare than normal, I still have much wisdom to impart about nail polish. 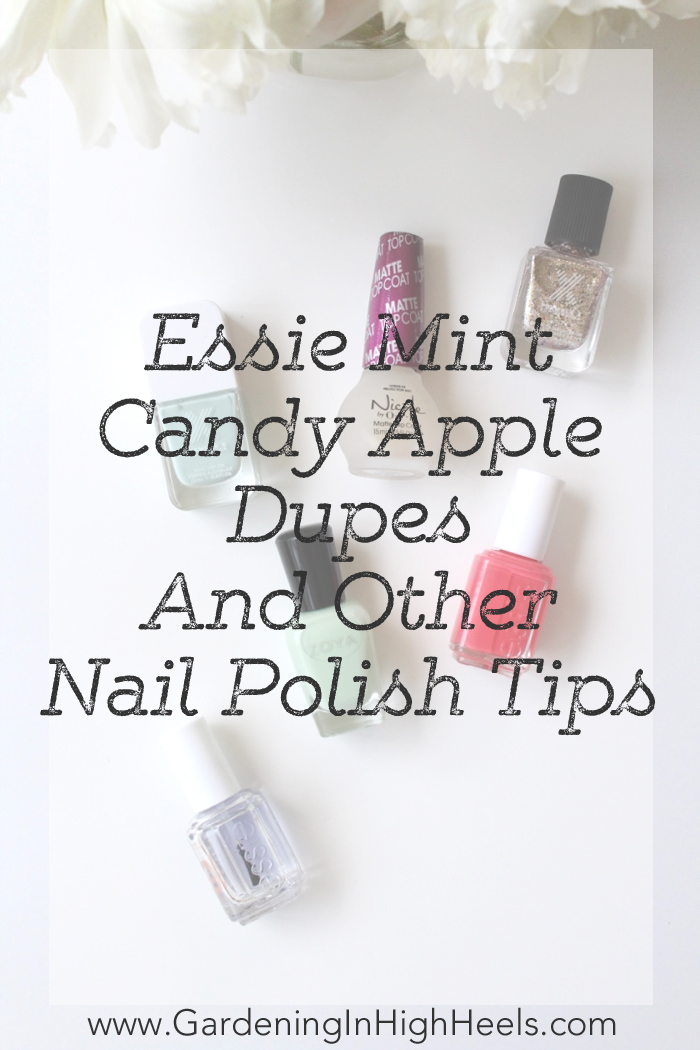 — I’m not totally sold that matte top coat applied between coats of light or streaky polish will even it out and give you an even application.  But it does seem to help.  I need to work a little on this technique.

— I also know that you should wrap the tip.  I know, I know.  It sounds dirty.  But it isn’t!  It’s bringing the color of your nail polish or the top/base coat over the tip of the nail.  This seals everything in.

— OPI Nail Envy didn’t make my nails envious at all.  I think it actually made the more prone to breakage when I didn’t use it.

— Essie Three Way Glaze is fantastic.  If I don’t set it, though, it does crease when I’m asleep and my hand is resting against the sheets, which is annoying.  But the shine and staying power is worth being careful the first night after a fresh polish.

— You can set your polish with a little Pam.  Run under cold water to wash off the oil and go.

— I’ve heard that you can put Vaseline or moisturizer around your cuticles as a barrier for the color so it’s neat and clean.  I’m worried that it will mix with the polish and spoil its efficacy.

— I’ve been hunting for an acceptable dupe for Essie Mint Candy Apple since I broke my original bottle.  It was after the new formulation of the color so I couldn’t just buy a new one.  And it took me forever to locate my first bottle when I was at Penn State.  The formula available at Ulta now looks blue.  That is NOT minty or appley!

I think I found the best double in Formula X in Unmistakable.  It’s a light, minty, blue-green.  I thought Zoya in Tiana would be good, but it’s definitely more yellow-green than blue-green.  Sally Hansen Xtreme Wear in Mint Sorbet is an exact match for Zoya Tiana, though.

OPI in That’s Hula-rious and Gargantuan Green Grape are too green to be Mint Candy Apple.

Now that I’ve gone on about nail polish, I’m going to go on about budgeting.  Today is the first post for Emily Levenson’s Project:Food Budget.  I do my grocery shopping on Tuesday morning (after this is published) so I can’t really say how I’ve done so far.  I have made a meal plan (and will try to stick to it..unlike some of my past weeks!)  I am setting myself up with a $50 per week budget at the grocery story and other places where I buy food to cook.

I’m going to try to be intentional with the bill and track food as well as things I purchase at the store that contribute to eating in (storage bags and aluminum foil for example).  I will not include toiletries, greeting cards, etc that I can also buy where I shop.

For that reason, I’ve also decided not to include eating out in the budget because a) I rarely do it and b) if I do, it’s usually with Jonathan, so that’s more of a “date/entertainment” expense than a food expense.  Are you joining in to track what you’re spending?

What could you write a book about?

Be a Better Blogger is a weekly link up dedicated to helping you be a more intentional blogger.  Want to be a better blogger but don’t know where to start? Head over to the Be a Better Blogger page for daily prompts and a weekly linkup to help get the creative juices flowing! Oh, and use #beabetterblogger on Twitter/Instagram/Facebook to keep the fun going even after you hit Publish!