Beer. It’s a magical beverage that makes me funnier and dance better. It also is more than the nasty swill we all drank in college (don’t lie, you drank it, too). I’ve come to be quite fond of bitter, hoppy ales and smooth coffee stouts. Definitely a far cry from my days of beer-flavored water.

Hey, it was cheap and got the job done.

Jaelan at Making Mrs M is a fellow beer enthusiast and she has fantastic recommendations for pairing beers and, being the over-achiever we all know and love about her, even whipped up something you can make to go with your beers.

My rule of thumb when pairing beer (or anything really) is to find something that complements the flavor of the beer instead of fighting it.

Think of flavor combinations you like that wouldn’t think would go together (lavender and lemon, chocolate and potato chips, berries and balsamic vinegar). There’s a flavor in one that intensifies the flavor in the other. Citrus brings out the herb. Salt highlights a true chocolate flavor. Sweet tones down the sour (and vice versa).

Contrasting flavors are an opposite of something already present while complementary flavors are close enough to each other so they work together without overshadowing.

So what do I pair with beer when I want to intensify flavors in my brew? 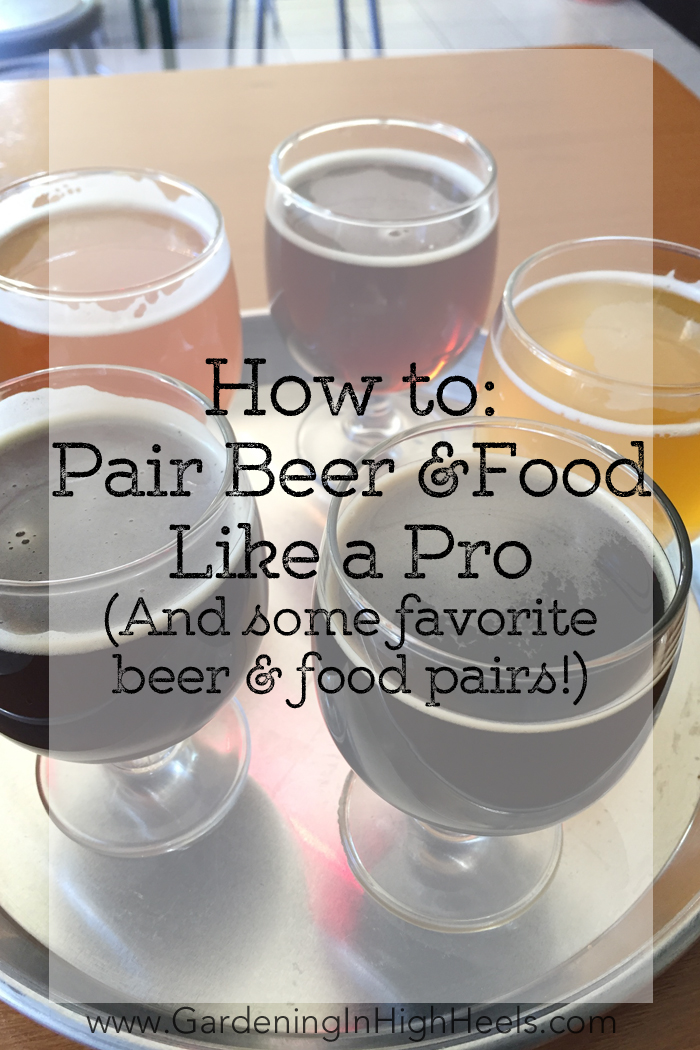 I like hops. I like roasty beers. It’s only natural that I’d like Black IPA. It’s fun to say. Like a Shirley Temple Black. And it’s interesting to drink, too. I’m not going to write a dissertation on characteristics of black IPA, but to me it’s like a stout and an IPA had a love child. A roasty, hoppy love child.

What goes well with that? Well, I had Midnight Moonlight by Fat Head’s Brewery a few weeks ago and paired it with Irish Nachos (made with potato chips instead of nachos) and it was a great pairing.

That said, I usually like to pair my dark beers that can get a little heavy in flavor with something sweet to light up another part of my tongue and enhance some of the chocolate undertones that can come with malty beers. Chocolate cake or rich, fudge-y brownies balance out the bitter and highlight chocolate roast in Black IPAs.

Side note: Black in the USSR by Grist House Craft Brewery isn’t a black IPA, but it has some nice roasty similarities and it pairs fantastically with ice cream sandwiches, specifically the peach ice cream sandwich from Leona’s Ice Cream Sandwiches in Pittsburgh.

I’m talking about American wheat beers. I am not a fan of the super-yeasty (and bubble gum banana clove-y) hefeweizen-style wheat beers. One of my favorites is Grist House Craft Brewery Wheatin’ for the Weekend. This is a perfect porch beer. It is light and refreshing with a touch of stone fruit, just what I want a wheat beer to be. None of that banana crap.

What goes with a wheat beer? Well, I like wheat and grains with my wheat beer. Something yeasty to complement the wheat in the beer. Pizza with a light oil sauce, mild cheese, and green veggies on top? Yes please. Macaroni and cheese with a light cheese sauce and roasted onions and squash (like the mac and cheese from the Mac & Gold Truck?) Yep. Been there, loved that.

Shout out to a favorite red right now goes to Troegs Independent Brewing Nugget Nectar. I worked with someone (in a restaurant that specialized in beer) who named his dog after Nugget Nectar, so you know it’s good. This ale is bitter. If black IPA is like a stout and an IPA had a love child, this is as if a ginger hop and another ginger hop had a love child. It is bit-ter with a capital Hello 93 IBU.

So what would go with this? As luck would have it. Troegs has a great chart to help. I’m all about this with a mango salsa topping chicken tacos; adding something to complement the fruity notes in this beer and add a little heat makes for an interesting pairing.

I’m pretty sure this could have been an ode to Grist House, but I tried my best to spread some hopped love around. Just remember: try to find a complementary flavor and work from there. If you want to go crazy, find a contrasting flavor and go crazy.

Hop on over to Jaelan’s blog to see how she paired her favorites!

What beer and food combos do you like to play with?